A sort-of miracle happened around mid-day.

Hawaii’s athletic directors voted in favor of a 35-second shot clock rule that will go into effect at the 2024 boys and girls state tournaments. 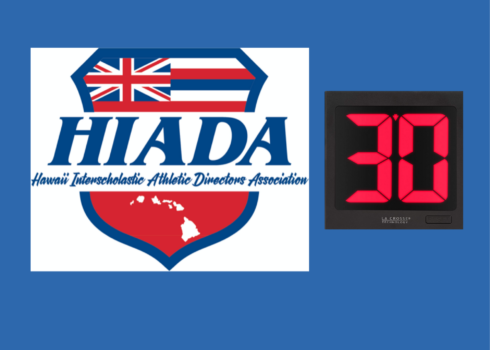 Coaches who Bedrock Sports Hawaii spoke with before the annual Hawaii Interscholastic Athletic Directors Association conference began at the Outrigger Kona Resort and Spa on the Big Island on Tuesday said the chances of the proposed rule passing was slim to none.

But somehow, the measure was passed in the final count of 91 voting athletic directors.

Only eight other states use the shot clock, but it will likely become more common because the National Federation of State High School Associations voted recently to allow its members across the country to adopt the rule in order to begin to standardize what is expected to be a trend that many other states will follow.

Now, Hawaii high schools that plan to host the state tournaments are going to have to figure out how to pay for the installation of the clocks before the rule goes into effect. According to some in the know, there might be cheaper ways to install the clocks now — with TV-like screens a possibility — than it was years ago when technology wasn’t quite as advanced.

The shot-clock proposal passed by a pretty slim margin — 47-44.

Later Thursday, all proposals passed by HIADA (and there were 24 of those, according to ScoringLive.com) were sent on and also passed for final approval in the last step of the process — by the Hawaii High School Athletic Association executive board.

The shot cluck rule getting passed came as a surprise to most coaches, especially since the proposal barely made it out of committee on Wednesday. On that day, 16 ADs voted for it and 20 against. But a minority report (a legislative tool that can be used when committee voting is close) was generated, allowing it to proceed to the main assembly.

Here are some other proposals that also passed through HIADA and the HHSAA executive board:

>> A change in state cheerleading championships divisions from large (number of athletes on the squad) and medium to female and coed.

>> Track and field athletes will now qualify for states by meeting a standard time or distance set before the season, but the total number of participants in an event will be capped at 24. Last year, for the first time, the top 24 athletes based on time or distance qualified and there was no standard to meet.

>> Anyone not meeting the set requirements to coach in the state tournament will not be allowed to do so. This new rule does not differ much from the old rule, except the non-compliance part has been made clearer. Each school will be responsible for making sure all coaches meet the requirements.

>> According to many athletic directors, there was impassioned discussion at the committee level and by the main assembly regarding a measure having to do with state tournament representation. It took a while (a few days) for Bedrock Sports to find out details regarding this particular proposal. But we now have the goods. Now, thanks to passage by HIADA and the HHSAA board, a team does not need other teams in its league to qualify for the football state tournament. For instance, PAC-5 was previously unable to go to states because it was the only squad in ILH D-II. Now, if PAC-5 (should it be he only ILH D-II football team again nest season) will automatically be the ILH’s representative at the D-II state tournament. That previous rule banning a one-team league from the postseason was for football and not other sports.

One athletic director told Bedrock Sports Hawaii that this new rule is not fair because the ILH will get 100 percent of its teams into the D-II football tournament, but other leagues will send a much smaller percentage of its teams to states.

>> State wrestling athletes will no longer be able to use the 2-pound growth allowance when certifying for a specific state championships weight class, according to ScoringLive.com.

>> Athletes at the state judo tournament will be granted more injury time during a match if the injury is to the head, neck or nervous system.

>> Brackets and results for the state wrestling championships will be inputted and be able to be seen by fans, parents and coaches in near real-time on TrackWrestling.com.

The following item did not pass at HIADA:

—–
Note: This story has been edited to make it clear that the shot-clock rule will be for state tournaments only.
—–