It’s 10 games into the franchise’s inaugural NHL season and a jolly good time for a close (and fun) look at how the Seattle Kraken players have stacked up so far.

But first, a little bit about where the team stands. Seattle sits in last place out of eight teams in the Pacific Division. If everything goes right today (for example, a home win over the Buffalo Sabres to go along with a Vegas Golden Knights loss to the Ottawa Senators), the Kraken could jump all the way into fifth place.

So, despite a somewhat rough 3-6-1 start, the team is by no means destined for the cellar.

One of the absolute best traits of the players on this team is their tenacity that also lends to the ability to be “in” every game for three periods. 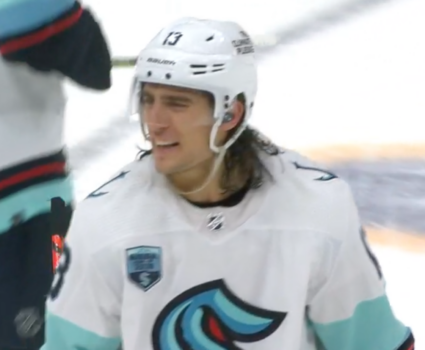 Brandon Tanev, one of two Kraken players with an A+ grade after 10 games.

As a matter of fact, there was only one game in which the Kraken played that, basically, they had no chance of winning — a 6-1 loss to the Philadelphia Flyers on Oct. 18.

Of the seven (six regular time and one in OT) losses, five of them have been, in essence, by one goal. By “in essence” I am including two-goal deficits when a pulled goalie leads to an empty netter.

Here is a closer look at those five losses:

And it’s true that offensive production has been limited — as many pundits predicted from this team that was built with goaltending and defense at the forefront.

But there are signs that the floodgates to production and the winning ways that are certain to follow may be opening soon.

Here are two of those signs, from Seattle’s last two games:

>> 2. The Kraken outshot the Edmonton Oilers 41-26 in a 5-2 loss (the team’s second-worst defeat) on Monday. The Oilers (8-1) are tops in the Pacific Division. It should also be noted that it was a 3-2 game deep into the third period before the high-flying Edmonton offense pulled away.

Yes indeed, keep on shooting and good things will happen for Seattle. And in order to get those shots (a whopping 73 in the last two games) it means that most other facets of the game are clicking — tough forechecking, clean breakouts, overall puck control and neutral zone positioning.

And so, here we go with the GRADES for everyone who has played at least five games!!! Remember, this is a fun exercise, not meant to be too serious. And there are no D’s or F’s. It is highly evident that everyone on this team is doing their best. In most cases, lower grades means there is more potential to be realized. I don’t expect everyone to agree with all of this, so go ahead and argue. It’s just my take.

There was only one game in which Tanev was invisible. When I saw that happen in one of the first few games, I was worried that he might go into a funk. Haha. Not a chance. This guy is amazing. From point A to point B, I don’t know of a quicker NHL player. That type of skill is an absolute nightmare for opponents who need just a bit more than a fraction of a second  to make a clean pass. But he does so much more. His 6 goals leads the team and is a bit of a surprise. Take those goals away and he’s still a B player. He hits (35 leads the team, No. 6 in the NHL) and he’s a threat near the net for tip-ins and he does it all while ranking 15th on the team in ice time (14:42). Oh, and Tanev also leads the team in plus/minus (+2).

This guy is an offensive whiz, but he’s also a pain in the butt for opponents with his physical play. He’s only played in six games and is tied for fourth on the team in points (1 goal, 4 assists) and is second in ice time (21:04). The way he’s playing, getting to open space and creating his own open space, the goals are likely to come in bunches. Oh, and he’s also winning 54.8 percent of his face-offs.

First in points (7), second in goals (3) and  tied for second in assists (4). Production has been great, and the fact that he’s out due to COVID-19 protocol has put a noticeable hole in the overall flow of the team. He’s second only to Tanev in shot percentage (21.4) and he has a blazing and accurate wrister. 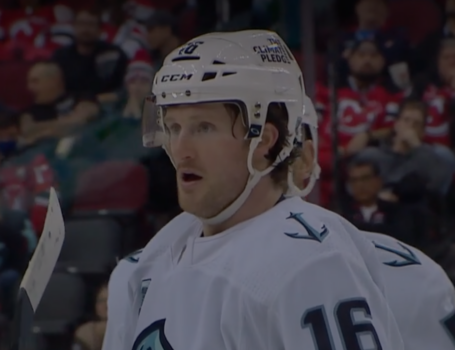 The Seattle Kraken have missed the presence of points leader Jared McCann, out due to COVID-19 protocol.

These stats — .896 save percentage and 2.82 goals against average— are far from great, but he has been more than great. Most goals against have not been his fault, meaning they happen more because of a defensive breakdown than his being out of position or failing to do the right thing. He’s only had one bad game, stats-wise (five goals against vs. Philly). He’s been making the saves he should make and he’s been spectacular making saves on golden chances by the opponents.

Giordano’s presence on the ice is a solidifying factor that no Kraken fan should take for granted. There are only two things keeping him out of the ‘A’ grade: a few instances of bad passes out of the zone that have led to goals and a minus-5 on plus/minus. The turnovers are uncharacteristic for the veteran captain. He’s been great leading the power play, he’s been great positionally on defense, and he’s tied with Tanev at second on the team in points (6).

A typical shutdown guy who almost always makes the right play and is in the right position when the opponents are transitioning from the neutral zone to an attack. His stats are awesome: first on the team in time on ice (21:16), fourth in the league in blocked shots (24) and he’s a league leader in hits (33). Sometimes, he gets caught out of position in front of the net when other teams are scurrying about.

Quiet and effective. Great forechecker. Great defensive forward. Great playmaker (tops on team in assists with 5) and near the top in plus/minus (+1). And he’s shown an occasional dexterous, dangerous and sly ability to create offensive chances. The odd are in favor of his breaking out of his goal scoring slump soon.

The one thing to keep in mind while reading this about Donato is that his production comes in just 13:18 minutes per game, which ranks 16th on the team. He’s been a solid performer on the power play. He has a solid two-way game and is very much an offensive threat from the slot and in front of the net. He’s also fourth on the team in shots on goal (19). No negatives to report here so far.

This guy is the whole package offensively. Great shot, great playmaker, and he’s fourth in ice time (19:31) and second to Tanev in hits among forwards (17). He broke out of his goal-scoring slump with a highly charged individual effort through the middle of the Edmonton defense on Monday. It would be surprising if a lot more goals weren’t on the way. Right now, he’s at 1 goal and 4 assists. The only negative: minus-5 in plus/minus. 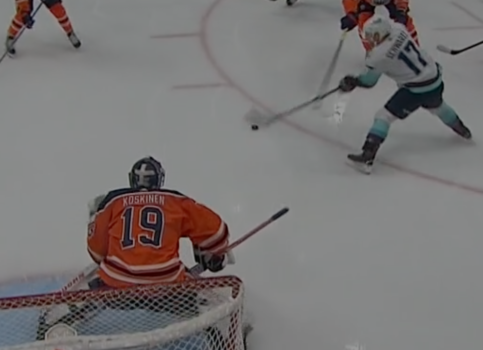 Jaden Schwartz unleashed a backhander for his first goal of the season Monday.

Like Schwartz, Eberle’s plus-minus (minus-7, worst on the team) is really the only negative. He’s tied with Tanev in shots (24), and he showed his goal-scoring ability with a blazing backhand from the slot against the Rangers. He has four points — 2 goals and 2 assists — and the production is likely to amp up.

Is sixth on the team in ice time and has been quite solid as a two-way player with lots of creativity. As has been the knock on him before, he does not shoot enough — only 11 shots in 10 games. He is capable of providing more offense, but has been doing the job (on this low-scoring team) with 1 goal and 3 assists so far.

Author’s note: This grade is reserved for all Seattle Kraken defensemen not named Giordano or Larsson. Simply put, job well done, but can be tightened up.

Great puck mover who adds a lot to the clean breakouts, the power plays and to the overall attack. Solid defenseman who sometimes caught in the wrong spot when the opponents are spending extended time in the offensive zone.

Second only to Tanev in hits (34), a shut down guy who sometimes has trouble covering some of the NHL’s super agile forwards deep in the defensive zone.

A physical style (29 hits) and a shut-down attitude, but is last among the seven defensemen in time on ice (17:11).

Almost always in the right position, making the right plays and has shown he can add to the offense (2 goals). Appears to be battling Haydn Fleury for a nightly spot on the playing roster.

Much like Soucy, he plays mostly a mistake-free brand of defense and has shown spark on offense (2 goals). Appears to be battling Carson Soucy for a nightly spot on the playing roster.

The definition of a tough fourth-liner. Lack of offensive production (1 assist) is to be expected. Is second in the NHL in penalty minutes with 29. With a 0 plus-minus, he’s also shown to be solid with team defense and backchecking. Is near the bottom in playing time (8:58).

A fourth liner averaging 11:21 minutes, he has taken 12 shots and has a 0 plus-minus. He also has a goal and an assist. Potential for more production is evident with his offensive skill-set.

Like Bastian and Sheahan, he has a 0 plus-minus and had been steady before a lower body injury took him out of the lineup after seven games. Offensively, he has just 1 assist.

Despite being the owner of a wicked wrist shot, he only has 1 goal and 0 assists in the 10 games. And he is also at minus-6 in plus-minus.

Has played in five games since returning from an injury. No points, averaging 16:15 minutes and has a minus-3.