Taam won 18U 132-pound titles in both folkstyle and freestyle competitions, and he is the reigning 132-pound Hawaii state high school champion who will be entering his sophomore season at Moanalua this fall. 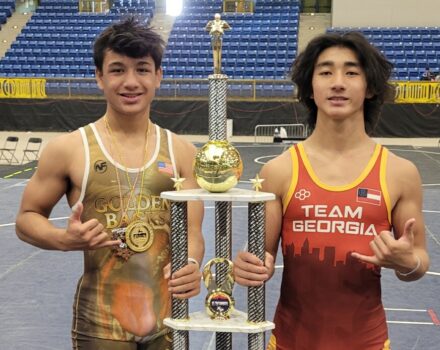 Akoni Kaaialii and Tyger Taam won championships at the Rocky Mountain Nationals last weekend. The trophy is  for Taam’s for his folkstyle title.

Kaaialii, who will be a senior wrestling next fall at Kamehameha, captured his championship in the 18U freestyle 145-pound class. He also placed fourth in 145 folkstyle.

Those two wrestlers represent Hawaii’s Golden Back Wrestling Club. Another from that club, Thales Caballes, placed sixth in 12U 82-pounds freestyle.

The full results of three Golden Back wrestlers at the Rocky Mountain Nationals, which were held at the National Western Complex, follow.

Thales Caballes, 11U 82-pound folkstyle, did not place