This is not an easy story to write.

But news is news and the result of recent litigation should be reported.

Nearly a year ago, a Leilehua senior wrestler was arrested for allegedly assaulting a referee at the Texaco Wrestling State Championships. Witnesses on Feb. 22, 2020, said they saw the Mules’ Vitale Afoa, while being accompanied by many family members and friends, grab a referee, push him down and threaten him because Afoa was disappointed after losing a match.

As a sports reporter at the Honolulu Star-Advertiser at the time, I, too, was a witness to the commotion, but could not see the full skirmish clearly from the press table. I saw a rush of people and a clash and heard angry words and the situation in front of a packed arena was obviously tense. About 15 minutes later, after Afoa and his family and friends were escorted out the back door of Blaisdell Arena, police cruisers showed up and officers put the cuffs on him.

Afoa, 18, was charged on two counts, and as far as I know, no other media outlet has reported what happened in the ensuing court case, which was finally resolved in October. But, like I said, it should be reported.  After all, the original stories and photos of Afoa being cuffed on Star-Advertiser.com and its high school sports website, Hawaii Prep World, got around 70.000 hits. People probably want to know what the eventual outcome was, so on Thursday I looked at the court records. 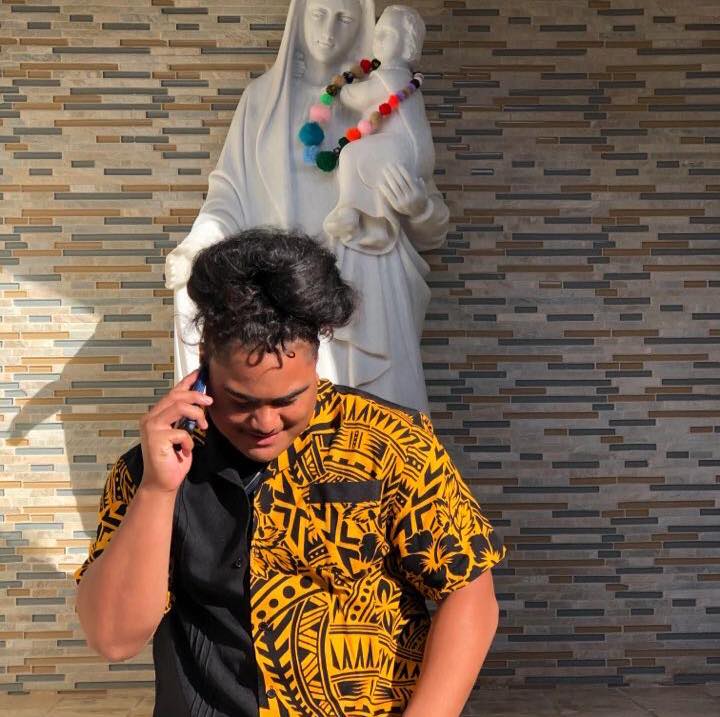 Afoa, a 2020 graduate who was also a standout two-way football player at Leilehua, pleaded no contest and waived a jury trial before finally receiving six months probation and an order to pay $135 in court costs for the two offenses — harassment (insult, taunt) and harassment (strike, shove, kick).

Fortunately, for Afoa, the penalty was not harsh. And, to me, that’s a good thing. People make mistakes and this one mistake does not define him. On Afoa’s Twitter page is the slogan, “God first and everything follows.” So, that’s a good sign.

I have often wondered if he’s learned from that mistake. I would like to ask him what he’s up to now. Maybe he’s in college. Maybe he’s planing to play sports in college if he can. I don’t know exactly how to reach him and I’m not sure if he would want to talk if I did reach him. 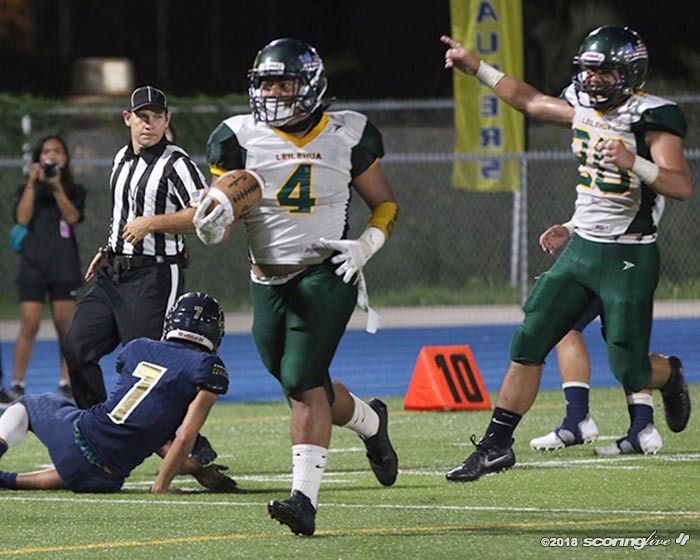 Vitale Afoa returned an interception for a touchdown during a 2018 game. (Image credit: Gregory Yamamoto/ScoringLive.com).

Ironically, the incident occurred just a few weeks after Hawaii Senate Bill 2549 was introduced. If it’s ever passed, it would “establish assault of a sports official as a result of their performance of duty at a sports event as assault in the second degree, a class C felony.”

There has been a nationwide increase of late of referees being assaulted or harassed for what some perceive as bad calls.

Below is part of a thread of comments from the Star-Advertiser’s breaking story from a year ago. It shows readers’ diametrically opposed views on how hard the punishment should be if Afoa was eventually found guilty.

Reader A: “The child and family should be banned from all prep sports.”

Reader B: “Officials should be investigated for not being fair. Had some questionable calls.”

Reader C: “He shouldn’t have been arrested. A cooling off to offer apologies to the officials and an immediate suspension would have been more appropriate. Jailing every 18-year-old hothead is sending him/her on the wrong path. Give him direction, not jail time. Wahiawa kids are good kids.”

Reader D: “Sad. He lost more than a match. He lost any potential college scholarship. Hope he can overcome the uphill battles coming his way.”

Reader E: “I hope the consequences won’t be too harsh for this young wrestler. They are all good kids trying to stay out of trouble … practicing every single day for two, three hours, sometimes even more. All these tournaments are very emotional for them. I’m sure he already regrets what happened.

Reader F: “Not all kids are good and trying to stay out of trouble. Others are, but have emotional/behavioral issues. Nothing is emotional enough to hurt someone else. He should be looked at in depth and punished. It’s completely inexcusable. He is a teen, not a 2-year-old.

Reader G: “Too bad it had to be taken to that level. Sports activities are supposed to build character and discipline.” 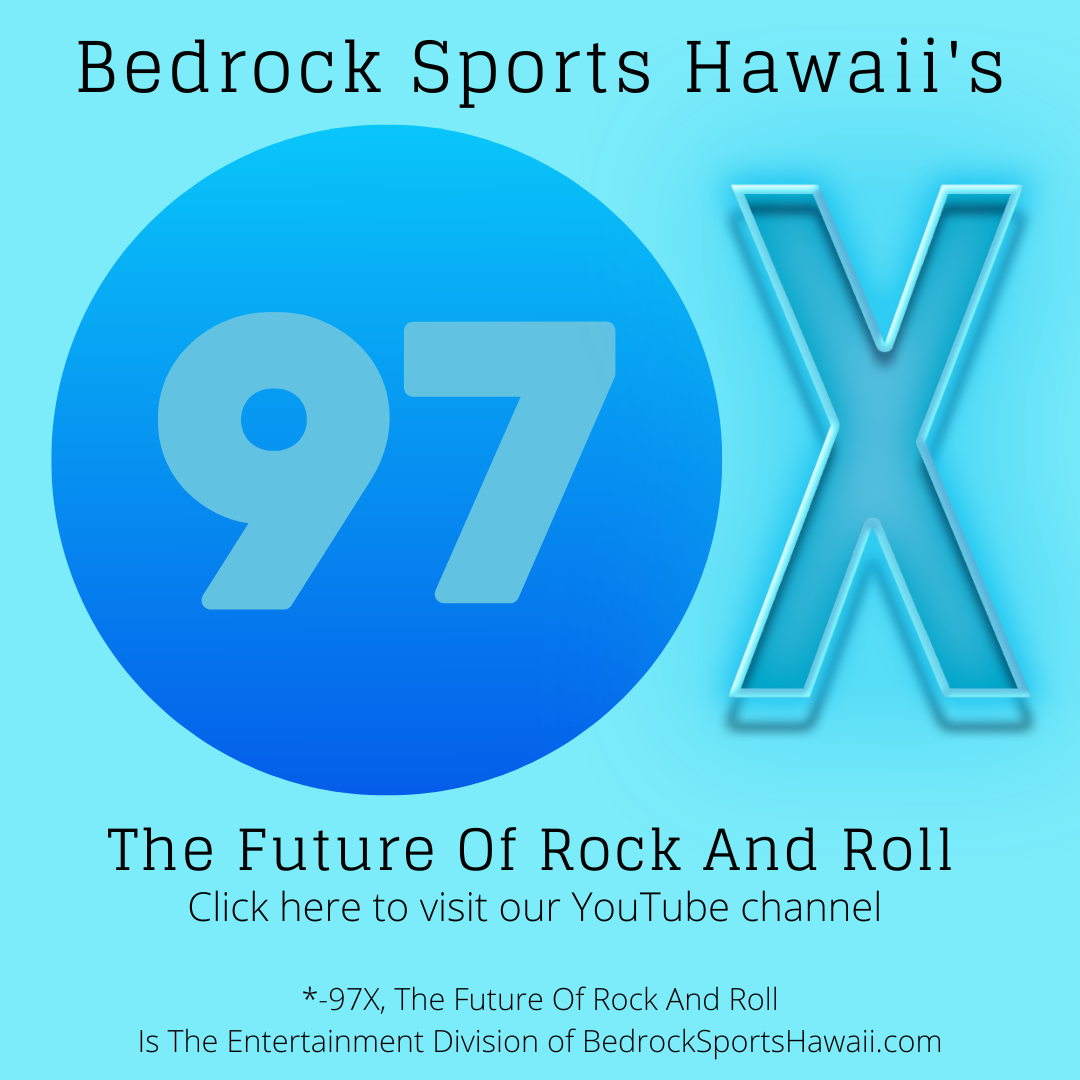