There’s always a lot going on in the Hawaii wrestling community. Sometimes, it’s easier to get multiple story lines out in one post.

So here goes for today:

Maui’s Diesel Del Rosario went to the Western Regionals in Farmington, Utah, and returned home with a fifth-place finish in the 16U 120-pound freestyle division.

Del Rosario’s match results from the May 12-14 freestyle tournament follow.

Del Rosario, who competed for Lanai High during last winter’s wrestling season, also competed in the 120-pound Greco-Roman division, going 1-2. Those results are below. 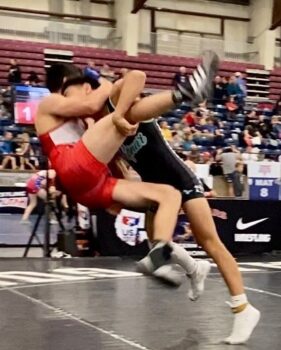 Diesel Del Rosario with a takedown at the Western Regionals.
Image credit: Courtesy of Michael Labuanan).

In the same tournament, Hawaii 126-pound high school state champ Mikah Labuanan of Kamehameha-Maui finished with a 2-2 record in freestyle and a 1-2 mark in Greco-Roman.

Corbett takes on the new role after five seasons as the women’s coach at Lyon College (Batesville, Arkansas).

“I’m very excited for the chance to lead the Missouri Valley women’s wrestling program,” Corbett told ValleyWillRoll.com. “It’s truly an honor to be able to take over a program that has so much history and tradition behind it. I truly believe with the support I have here at Valley, I will be able to keep producing world class talent and bring home championships.” 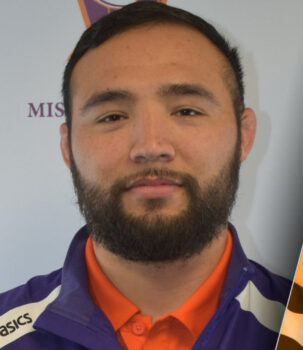 Last season, three wrestlers from Hawaii were on the Missouri Valley roster — Alyandina Bushe of Kapolei, Lilliana Campbell of Hilo, and Mahealani Ramirez of Aiea.

Mega Football Matchups: Mililani vs. Mater Dei, And Kahuku Vs. St. John Bosco In One Showcase