When Kaeo Akana was a freshman football defensive end for St. Francis’ intermediate team, the talk was that he was going to be a real good one.

But back then in Fall 2018, he was in the shadow of his brother Bubba Akana, a senior three-sport star with the Saints.

Much has happened since then, including a worldwide pandemic that put a crimp in every high school athlete’s career. In addition, St. Francis closed its doors in 2019. 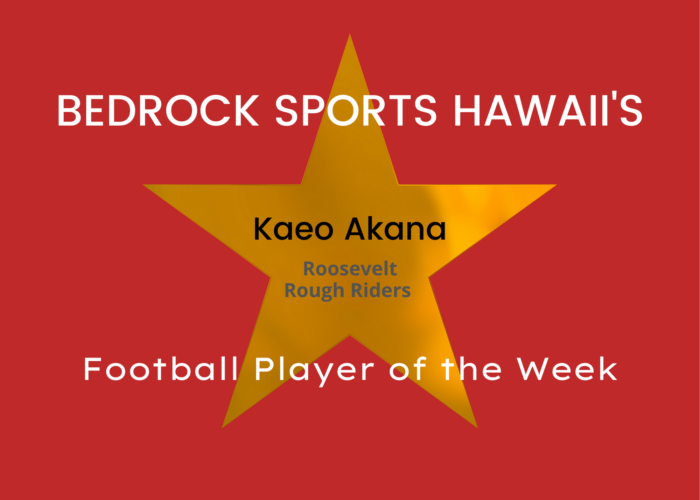 As a sophomore, Akana wound up at Roosevelt and helped lead the Rough Riders to the OIA Division II championship and a spot in the state tournament.

And, despite the fact that there was no 2020 football season, the Division I FBS offers piled up for him and he eventually orally committed to play for Boise State.

As a senior this year, Akana and his teammates barely missed making the OIA playoffs and getting a spot in the D-I (the Rough Riders moved up one tier this year) state tourney. But they went out on a high note, beating Waipahu 17-16 in their finale on Saturday night.

Akana himself had career night, with 10 total tackles, eight of them for losses, including five sacks. (Editor’s alert: When was the last time you saw anybody have five sacks in a game at any level?) Oh, and add in three quarterback hurries and six rushing yards on offense for good measure. This type of performance is completely worthy of Player of the Week status, and that’s exactly what Bedrock Sports Hawaii has done.

(Another alert: Thanks to Thomas Yoshida, a stat master, who was with the OC-16 crew for Saturday night’s game, we have these detailed numbers.).

“After the Moanalua loss, we knew the season was coming to an end, so we wanted to come out one last time and go out with a bang,” Akana told Bedrock Sports Hawaii on Monday. “We wanted to win for our coach and our guys one last time.

“I consider it one of my best games, but you’ve got to give a lot of credit to the DBs and safeties for giving me time to get after the quarterback.”

Akana is expected to play the edge defensive end position for the Broncos in college.

“I’m excited about going there,” he said. “It will be new and I’m looking forward to the adventure and the challenge.”