SECOND IN A THREE-PART SERIES

When you’re a sportswriter, you tend to know a bunch of sporty people — some who you know well, some who are acquaintances and even some who are your neighbors.

You wish them well in their endeavors. But you don’t necessarily expect them to be superdy-duperdy, top-tier athletes in their chosen sport.

For some reason, though, during this winter and spring, one after another of people I know competing on the mainland are just doing incredible things in various sports.

What follows is the second in a three-part series.

Pamaylaon, a senior forward for Bryn Athyn College in Bryn Athyn, Pennsylvania, was the Lions’ leading scorer — by far. But he also wound up as the Colonial States College Hockey Conference Most Valuable Player and leader in goals, assists and points.

In 20 games for the American Collegiate Hockey Association Division II team, he scored 26 goals with 47 assists for 73 points — a 3.65 points-per-game clip. In addition, he had four game-winning goals.

Aiea’s Zach Pamaylaon holds awards for conference MVP and most goals, assists and points in the conference.

During the non-existent 2020-21 season due to the pandemic, Pamaylaon kept in hockey shape with some skating and inline hockey pickup games at the Hawaii Kai and Mililani rinks.

In his four-year career, Pamaylaon — who learned to play hockey at the Ice Palace — scored 39 goals with 68 assists for 107 points.

Lance Hamilton, like Pamaylaon, has plenty of experience playing in Hawaii at the Ice Palace and in inline hockey.

As a kid, Hamilton was a verifiable rink rat at Kapolei Inline Hockey Arenas, getting as much time on the court as possible.

He recently finished his second season with the Elmira Junior Enforcers (Elmira New York) of the United States Premier Hockey League, which bills itself as the nation’s largest amateur ice hockey league.

And Hamilton not only won the team’s Most Improved Player award, he also finished tops in goals with a program-record 24 and second in points with 37 in 44 games. 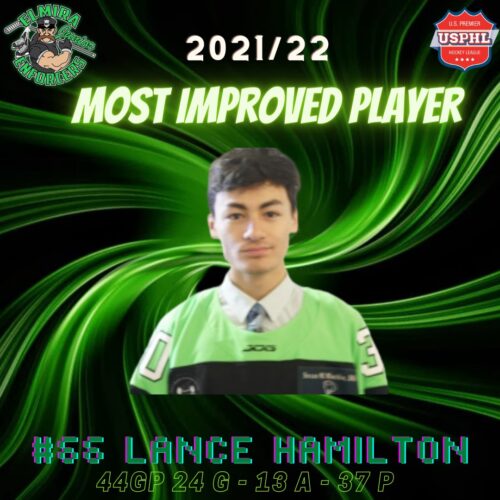 Roosevelt alumnus Lance Hamilton will spend his summer in Hawaii, play some hockey at Kapolei Inline Hockey Arenas and decide where he will be playing next season.

It was a major offensive explosion for Hamilton, a right wing who notched five goals and five assists one season earlier.

“Hamilton spent his summer in the arena putting in plenty of work. What a year and what a legacy,” read a Junior Enforcers news release.

Editor’s note: This article has been edited with new information since it was originally posted. The Bryn Athyn ice hockey team changed its designation from NCAA Division III to ACHA Division II for the 2021-22 season.

ALSO IN THIS THREE-PART SERIES: