Jaden Nahoi-Baricar is a speedy and shifty inline hockey player who has had lots of success playing the sport in his hometown of Kapolei.

Continued improvement through the years with the Kapolei Inline Hockey Arenas travel teams at national tournaments opened the eyes of the Arizona State University club coaches, who placed Nahoi-Baricar on the Sun Devils’ Division I roster starting in the 2020-21 season.

But after suffering a broken ankle in October 2021, things looked bleak for Nahoi-Baricar as he headed into his second varsity season. Eight weeks of recovery and rehab took him out of hockey until January.

Then, in the semifinals, the Sun Devils lost 2-0 to Slippery Rock (Pennsylvania), a team that advanced to the championship game and wound up losing 7-2 to Lindenwood (St. Charles, Missouri). 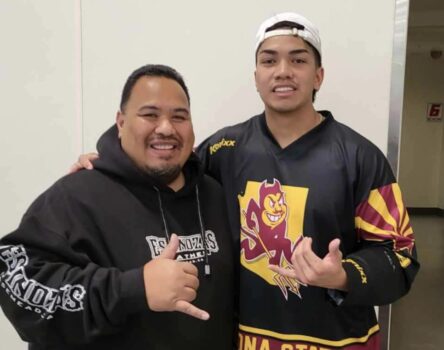 In 21 games this season, the 5-foot-11, 175-pound Nahoi-Baricar scored four goals with seven assists for 11 points.

Nahoi-Baricar, an electrical engineering major, will be back to play for Arizona State in his junior season this fall.

A video of Nahoi-Baricar (No. 21 in dark jersey taking the face-off to start) and the Sun Devils in the national semifinals against Slippery Rock is below.