For Hawaii Hockey Players To Make It Far, Don’t Underestimate The Importance Of Thinking Big

Author’s note: In case you don’t make it to the end of the story, I wanted to point out that near the end there are four videos from four different vantage points of the same beautiful goal scored during a summer hockey camp game — a rarity!!!!

As you read this article, I ask that you don’t lose sight of the fact that it is being written to show the importance of THINKING BIG. That’s something that won’t be super evident in the text until the latter parts, so … keep reading.

Hawaii has had a ton of hockey talent through the years and it continues to improve.

Hockey in Hawaii, you ask? The Ice Palace opened for hockey in 1982 and then inline hockey took the state by storm starting in the early 1990s at a dozen or so outdoor facilities.

—————–
This story is brought to you by two of BedrockSportsHawaii.com’s generous sponsors:

With the Ice Palace closed for renovations starting in 2020, the most viable outlet for hockey enthusiasts has been Kapolei Inline Hockey Arenas, which has given players on inline skates (with wheels) a popular and air-conditioned alternative to the ice version of the game since 2010.

At the moment, the Ice Palace website reads “Opening Soon,” giving the ice players hope that they can return to their favorite form of exercise.

Meanwhile, the KIHA website is full of results and schedules from all of the age group divisions from 8U to 15U.

A men’s team from Kona is also playing at that tournament.

So, yes, Hawaii is on the map in the inline hockey world.

In the following video clip, Jaden Nahoi-Baricar, who grew up learning hockey at KIHA, is shown playing for the Arizona State Sun Devils last season. During the clip, the announcers mention that he is from Hawaii and that there is a lot of hockey being played there at a really nice facility.

Nahoi-Baricar (inline) and Lance Hamilton and Zach Pamaylaon (ice) are at the forefront of the Hawaii to mainland hockey talent brigade, and Bedrock Sports Hawaii has covered their mainland achievements extensively in the past.

And now, we bring you some new-found video of Hamilton and Pamaylaon:

Lance Hamilton (above) scoring on a breakaway for the Elmira Junior Enforcers of the United States Premier Hockey League.

Top-notch quality video of Zach Pamaylaon (on team with red jerseys above) coming through with two assists (at the 0:39 mark and 0:55) and a goal (2:01) for Bryn Athyn during the 2019 season, when the school was in NCAA Division III.

Kawena Lee And Kyler Okamoto Are Back At Wisconsin Camp

Two more Hawaii inline players are on their way to mainland careers. Right now, they’re at a camp in Wisconsin for the second summer in a row.

They are Kawena Lee, who will play for Bethel University this fall, and Kyler Okamoto, who is still a young pup going into his sophomore year of high school. They’re making themselves known.

What will follow (eventually) are four videos of Lee and Okamoto sent to me by their parents — Nicole Lee and Scott Okamoto — from the Wisconsin camp, where, it sounds like, the players are having an incredibly fun time.

The four videos are from four different vantage points of the same incredible goal in which they pass the puck to each other several times.

But to properly set the stage, let’s first take a look at two other videos of similar plays, including a goal by Ondrej Palat of the Tampa Bay Lighting on a pass from Nikita Kucherov in the Tampa Bay Lightning’s 5-4 overtime loss to the Colorado Avalanche in Wednesday’s Game 1 of the Stanley Cup Final:

The other set-up video features Lee and Okamoto from a game held at KIHA earlier this year. In that one, there is also a certain old hockey dog wearing No. 19 in white who might be recognizable to some readers:

And now, moving on to the four videos of the special goal put together by these two Hawaii teenagers just last week in Wisconsin:

In the latter three videos, you see the play from the opposite side of the rink, including two that include how the play develops in their own end.

In those latter two, note that Lee, the eventual goal scorer, motions to his defenseman to go behind the net to start the play. He then circles on the right wing for a pass that doesn’t come, so he circles again, buying TIME and SPACE, to receive the pass. He then gets by a defender along the boards and skates with speed to initiate the offensive play with a pass to Okamoto.

For those who don’t know or believe it (because, after all, this is my personal opinion), great hockey teams must have the ability to break out of their zone cleanly and hit their forwards with tape-to-tape passes in stride. This early out-of-the-zone momentum is hard to defend and ABSOLUTELY CRUCIAL to successful attacks.

But what most casual fans really only see is the puck going into the net, with not much careful analysis of how important that early set-up was. Breakouts that go haywire are momentum killers.

So, what was that about THINKING BIG?

Well, if you want to go big, you’ve got to think big.

And thinking big comes in all forms. Maybe it’s one or more of the following:

>> KIHA owner Richard Pentecost and hockey director Jami Yoder (a former professional player), who make it possible for inline hockey to be played at what many consider one of the best facilities in the world that happens to be here in Hawaii

>> Zach Pamaylaon (leading scorer and conference MVP in 2022 for Bryn Athyn, which downgraded its level from NCAA D-III to American Collegiate Hockey Association D-II in 2022)

>> Kawena Lee and Kyler Okamoto, who are pushing the envelope of their abilities by going to camp every summer and who practice drills by themselves every Sunday.

>> The dufus wearing No. 19 in white mentioned above, who has been around the hockey block much more than a few times, and as anyone who knows him knows, still dreams big, with the key word being “dream”

>> Aaron Ing, a KIHA and Ice Palace goalie who will be going into his sophomore year playing for the Lake Forest Academy high school varsity ice hockey team near Chicago 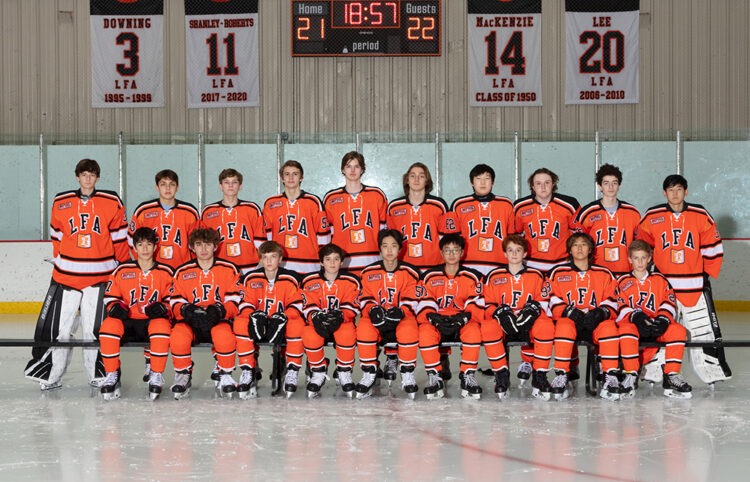 Aaron Ing, above back row right and below middle, plays varsity high school hockey for Lake Forest Academy near Chicago. 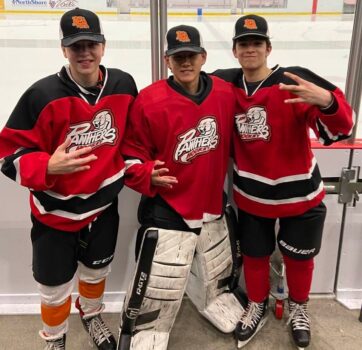 As for those videos of Lee and Okamoto, it’s worth noting, of course, that many others in this world can do the same thing, including many, many great players here in Hawaii at KIHA.

But the point holds true not just for Lee and Okamoto. If they and others can do it here and they can do it on the mainland at a camp for future collegiate players, then what’s holding them back from doing it, eventually, at the highest stage — like Kucherov and Palat?

The answer is: Maybe nothing. But it will NEVER happen if you think small.